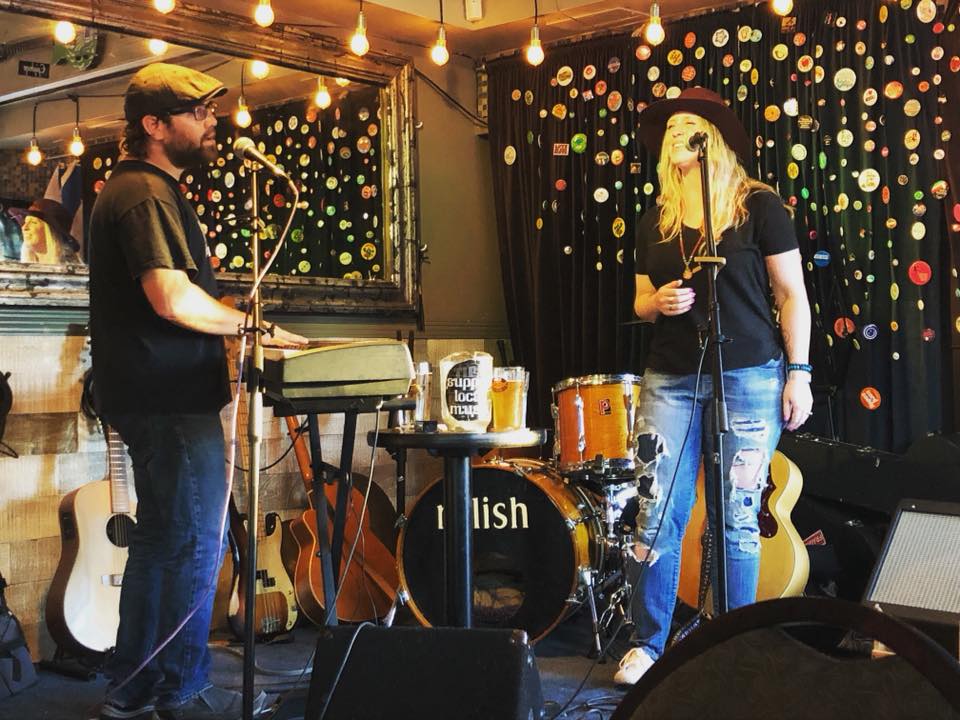 Those are lyrics that Josh & I wrote for a song, on an EP released back in 2015. It was not only the title track of that EP but it was the hook for the song’s chorus as well.  As I type it out I am singing the song in my head loud & proudly.  “A dream that’s not followed, is a dream that is lost. And no credit card can cover that cost”.

It’s been three years since we released that song. We are still actively following our dream, as much as we possibly can. It’s a lovely lifestyle to endure. If you follow us on instagram, you will see our description is: “We Write, We Sing, We Rock it out” and those things are all true, plus directly to the point I might add!

Recently we went on our first official tour. We booked the venues, set up the over nights, rallied the fans in each town & set off onto the 401 to our first destination.

We called it the #summervibestour and put our best foot forward to keep the positive and gratitude based energies in focus throughout.

Our first stop was in Toronto, ON. We luckily had a place to stay at my sister & brother in-law’s place in the Junction. They took our hippy asses in with open arms & also welcomed our beloved Shibby dog to stay with them as well.  The picture above, is us at Relish Bar & Grill on Danforth Avenue, where we played 2 sets of originals to a unique crowd with some familiar faces.

After two nights in Toronto, Josh, Shibby & I continued on to our next destination: North Bay. Well not exactly … we were set up to stay with a friend in Astorville, at a wonderful cottage on Lake Nosbonsing for the next 5 days. Located about 20 minutes south of North Bay, ON. When we got close to our destination, both Josh & I realized that we didn’t write down the address…commence the bickering. There are basically two things that Josh & I will argue about; Directions & Songwriting

Katie: “I thought you had the address?”

Josh: “I did have it…look through my text history and it should be there”

Josh: “Well then, look through my facebook messenger for it!”

Katie: “It’s not there either”

Josh: “I’m pulling over to find it myself…”

Come on now, gratitude it up Pascoe’s!

A couple real deep breaths, some serious (but silly) glares and a big laugh and we’re moving on.  Smile with me now.  Turns out, Josh deletes his history like a neat little freak. And I should have known this really…you should see our band’s email account. There’s probably 30 different folders he puts emails into – talk about organization, the boys got skills. We end up texting our friend Nicole for the address and she replies almost instantly. (Yes, I realize we should have just done that in the first place. Don’t be smart with me “reader”…hindsight is 20/20 – ya friggen know it all) *winky face*

Upon arriving to the Kennedy Cottage, we were greeted with a shimmering sparkling lake & welcoming abode with a modern meets retro vibe. It was here we settled in, cracked some beers & did a cheers to our vacation portion of the tour. You see, we decided to book our tour around a cottage vacation! It turned out to be a win-win for us. We had some down time to relax and get in some lake living. But we also were able to play shows along the way and spread our music around to some new listeners.

Our second gig was in North Bay, ON at a venue called Raven & Republic. A hipster style joint, with a wacky trivia night that bordered on the “I’m offended yet pissing myself laughing” front…FUN!  We met some great people here, and really enjoyed ourselves. Our friends staying at the cottage also joined us here, indulged in the trivia, delicious food & cheered us on from the cozy front row booth.

The third date on the #summervibestour was in Orillia, ON at a bar called The Brownstone Cafe. Orillia is somewhere Josh & I have a bit of a tie to, as most of his extended family is from this area. Josh’s cousin Sarah & her husband were brave enough to also take our hippy asses in (and Shibby’s) for the night. The Brownstone Cafe is a local watering hole that features a lot of live music. We were thrilled by the turnout here and put on our best show to date. It was there, in the bathroom of this bar, that I had a giant reckoning with myself. We had just finished our first set, I was on a musical high. Sweaty as fuck and smiling ear to ear. I looked in the mirror, grinned and said “This is what you were born to do”.  I giggled to myself, because I am strange like that. Then went out into the bar to continue the evening of rocking & rolling.

Innate in sense of direction and fully inspired, we headed home the next day. Sad that the touring portion of the trip was done. But hopeful, as we still had one more date on the tour poster to fill, in Grand Bend, ON the following week.

There’s something about being on the road, as a musician. It’s liberating. A feeling that you don’t get from just playing a local bar near your home. The idea of sharing your music to new listeners & music lovers everywhere is energizing. And the ability to share that with your significant other is just beyond what I am able to describe in words.

And so, just like that, the first official tour is in the books. The songs were sung, the hands were high-fived, the connections made. The musical high is out there, ready to be caught. Like a surfer on a wave. Radical but calm, smooth but shaky, we’ll chase it endlessly into the corners of this beautiful earth.

From here we’ll continue, so stay tuned for the next adventure. Because remember ~      “A Dream That’s Not Followed, Is A Dream That Is Lost”.